Updated 10/21: For our Spanish speaking readers, Pixar has released the ‘Imagine You at MU’ viral Monsters University ad in Spanish. Be sure to check it out below:

Original Post 1/3: Following the incredible success of their past viral marketing campaigns, Disney•Pixar has released the first television spot for Monsters University. The spot cheekily tiptoes around its true purpose, putting on the façade of the stereotypical college recruitment commercial. Watch:

After the success of the main Monsters University viral site, Pixar has created yet another viral site for the 2013 film, this time in the form of a student run Tumblr. The micro-blogg mimics that of an enthused college student including filtered photos and Tweet-like posts about on campus activities.

Among the photos, memes, and text posts, is the NCAA March Madness snub which animator Austin Madison teased a few days ago. Watch:

Be sure to check out all of the posts at the new viral tumblr and if history is any indication, keep your eyes peeled for more awesome marketing like this for MU.

Pixar has capitalized on it’s University themed film both from a merchandise standpoint as well as marketing for the film. Building on the outstanding Monsters University viral website, Pixar has already released two viral videos promoting the fictional university. Today, two new ads were released, both still under the guise of a college ad.

Both open with much of the same content that we have seen, however there is quite a substantial amount of new content within the ads (without giving away major plot points). Both of the videos come from the official Monsters University YouTube account.

Pixar has released another college advertisement style promotional video for Monsters University. While most of the clip uses recycled material, we do get a glimpse of several new sets as well as a bit of the MU Alma Mater Anthem.

Monsters University marketing is in full swing. After the American International Toy Fair, John Goodman made an an appearance on Late Night with Jimmy Fallon and introduced a brand new clip from Pixar’s latest.

The clip starts at 2:09, but the interview with Goodman is definitely worth a look.

And so the rivalry begins. We’ll have to wait until June 21st to see how it turns out, but it looks like it’s going to be a riot.

John Lasseter has always been known for his love of toys, and today at the American International Toy Fair, John Lasseter made a guest appearance to help Director Dan Scanlon introduce Pixar’s new line of Monsters University Toys.

John Lasseter joined the event in the form of a video introduction of several of the new toys.

And John Goodman was presented with a one of a kind Sulley toy which he held up quite proudly.

Photo © Inside The Magic

Disney Consumer Products also posted a selection of the new line of toys.

First up is the My Scare Pal Sulley by Spin Master Toys.

My Scare Pal Sulley comes to life when you squeeze his belly and will be available Spring 2013 with a MSRP: $39.99 (USD) 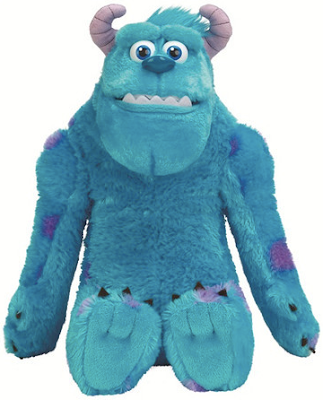 Next up is sure to be a END_OF_DOCUMENT_TOKEN_TO_BE_REPLACED

The full length Monsters University trailer is here! We jump back in time from the Monsters, Inc. days to see that Mike Wazowski and James P Sullivan weren’t always the best of friends. With the little taste of college life we get from the trailer, I think it’s safe to say that this is looking to be Pixar’s funniest yet.

“Mike Wazowski and James P. Sullivan are an inseparable pair, but that wasn’t always the case. From the moment these two mismatched monsters met they couldn’t stand each other. Monsters University unlocks the door to how Mike and Sulley overcame their differences and became the best of friends.

Screaming with laughter and fun, Monsters University is directed by Dan Scanlon (Cars, Mater and the Ghostlight, Tracy) and produced by Kori Rae(Up, The Incredibles, Monsters Inc.). The film opens in U.S. theaters on June 21, 2013, and will be shown in Disney Digital 3D™ in select theaters.”

What did you think of the trailer? Let us know in the comments!

With Mike and Sulley bringing us so many laughs and scares, it seemed like a natural step for Pixar to travel back in time and examine how Mike Wazowski and James P. Sullivan became such a dynamic duo.

The folks over at Animated Fascination have put up a Monsters University Sneak Peek (which appears on the soon to be released Monsters, Inc. Bluray) with Dan Scanlon breaking down the premise of Monsters University. While I’ve kept the blog post spoiler free, the featurette introduces us to a few new main characters while showcasing some incredible concept artwork that Pixarians are saying is a bit spoilery. Watch it at your own discretion.

What do you think of the story line for MU? Let us know in the comments…

Tonight marked the 40th Annual Annie Awards, an award ceremony which honors achievements in animation, from the SFX in a Live Action film to the Character Design. A big congratulations to the cast and crew of Brave who took home two awards.

The Annie Award for Production Design in an Animated Feature went to Steve Pilcher for his work on Brave. Mr. Pilcher had a very nice speech, thanking his fellow nominees and wife alongside Chapman, Andrews, Sarafian, Lasseter, and the cast and crew.

Again a big congratulations to all of the nominees and winners and we’ll see you again on the 24th!

Update: The folks over at The Pixar Post have uploaded a video of the acceptance. Watch:

Previously only known as rainycitytales332, Pixar has released two stills as well as a thirty second clip of their newest short titled The Blue Umbrella. The short will appear in theaters in front of Monsters University on June 21st.

The clip shows a drastic departure from the style seen in other Pixar shorts, going more in the direction of photorealism. Story-wise, it looks to be a very Paperman-esque boy meets girl story, which is definitely not a bad thing. (click to view high-res)

The companion WSJ article also names Saschka Unseld as the director of the short. Unseld has worked in Pixar’s camera and staging department since 2008. The soundtrack (which you get a little taste of in the clip above) is composed by  Jon Brion with vocals by Sarah Jaffe. Be sure to take a glance at the entire WSJ article (thanks to Pixar Place for finding a way around the pay wall).

It will be very interesting to see what comes of the blue umbrella, but if Pixar’s past shorts are any indication, it’s sure to be an emotional 5 minutes.

‘Art of’ Books from Chronicle